The Charitable Sisterhood of the Second Trinity Victory Church: a review 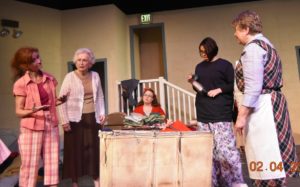 Dudley Sauvé and Waterworks Players have delivered another winner and this time it is “The Charitable Sisterhood of the Second Trinity Victory Church”. The play by professional playwright and Richmond native Bo Wilson captures the inner workings of a small southern town through the lens of the women who volunteer at a local church. This is a cleverly written play with a humorously distinctive message about community, good and evil, hypocrisy and love. The voices of the characters are authentically southern and at the same time uncannily universal. Wilson’s work has won a variety of awards and drawn a good deal of critical attention. When Sauvé, the director of the play, read it he laughed out loud and knew he wanted to do it. Linda Rofe, who is the production manager and along with Hannah Boswell also in charge of costume design describes the play this way:  “If you’ve ever volunteered with any group you’ll immediately recognize all the personalities you see presented on stage.”

The plot’s structure appears simple at first but the growing intensity of the dramatic questions that emerge requires serious reflection of a work that combines comedy and drama in unexpected and sometimes uncomfortable ways. The women of Second Trinity Victory Church have responded to a call for volunteers to sort through a large pile of donations in order to send clothes and other supplies to victims of a natural disaster in Guatemala. Their work takes place in the church basement with an emergency of their own unfolding– a rain that has brought down bridges, closed highways and resulted in massive flooding. Their organizer is the infamously controlling Bea Littleton (Daphne Mason), wife of Pastor Hiram Littleton. Her volunteers include Lorraine Jensen (Martha Womack), the sarcastic yet sensitive mother of 9 children.and Tina Yates (Val Wagoner), a transplanted Yankee, eager to find her place in the group. Mysterious newcomer Janice Murchison (Christy Leonard) appears to be frivolous and empty-headed, but it’s not long until the audience discovers that appearances are indeed deceiving and that Janice’s character is a lot more complicated and deeper than they have been led to believe. The cast is rounded out by young, vulnerable Riley Reynolds (Caitlin Mazura), a character in need of redemption. Mason and Womack do not disappoint and if you’ve seen them on stage together before, be reassured that their chemistry is as strong as it’s ever been. Wagoner is delightful as the helpful Mrs. Yates and delivers a real punch about mid-play with an emotionally gripping monologue. Leonard is exceptional as Murchison, while Mazura creates a tender, effective performance as Riley Reynolds.

The audience on opening night was responsive, clapping and laughing at the clever lines. Among the many memorable lines are “Many are invited; few can be bothered.” (Womack) and Mason’s ubiquitous “Now, ladies, this is what we’re going to do.” One audience member in particular, Nelson Webber, responded “I like the dynamic between the characters and the story is funny”, while Bob Mason, husband of Daphne, appreciated the humorous lines of dialogue interspersed with more serious themes.

This is a play about darkness and light and the shadows in between, about the things we have in common, including the things we’re not always emotionally honest about. It’s about those small but meaningful opportunities to do what’s right and how love shows up in the least expected places. It’s about the sins we condemn and the sins we excuse, as if gossip and criticism don’t cause serious harm. It’s also about the hypocrisy that often goes hand in hand with religious behavior but it’s also about how real love has the power to dispel the false and the superficial. The message is clear. Real love, when it shows up, is a game changer.

There are two more nights to see the play: Friday and Saturday, February 16 and 17 at 8:00 p.m. Tickets are $12 each and may be purchased online at www.waterworksplayers.org.