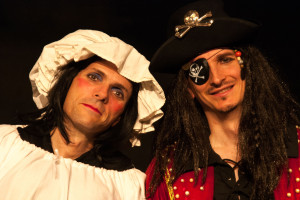 You won’t need an X to spot the treasure that is the latest Waterworks Players pantomime! With Mary Jo Stockton (Director) and Don Blaheta (Production Manager) at the helm, the cast and crew of Treasure Island present an entertaining twist on the classic tale by Robert Louis Stevenson. Prince Edward and Farmville residents will take special pleasure in this family-friendly show with its smattering of references to local lore. From the Admiral Bimbo bar scene to the deck of the Hispaniola, this comedy about friends and fortune on the high seas will have you laughing like you’re watching the latest in the Shrek franchise.

Audience participation is a key element of pantomime, a British theater tradition that also features double entendre, slapstick, and song (credit for piano accompaniment goes to a bedazzled Marcus Pendergrass). You’ll be in on the action from the opening lines when the delightful Ross Baldwin, who plays the orphaned Jim Hawkins, asks you to wave and shout hello whenever he arrives onstage. And the intrigue swiftly follows as a mysterious stranger (played by Trey Gee) arrives with a treasure map and Jim must enlist the help of courageous Captain Smollett (Matt Beachy) and his endearingly persistent housekeeper Molly (Katherine Lusk). Together they assemble a misfit crew.

First in line to board Smollett’s ship, the Hispaniola, is Dame Joanna Silver, Jim’s guardian, who hopes to outrun her creditors. Jordan Whiley plays the Dame and his endless antics, ad-libs, and enthusiasm rival Robin Williams in Mrs. Doubtfire. Unfortunately for Dame Joanna, her money problems follow in the form of two bumbling shopkeepers. The comic duo of Leigh Lunsford and Marianne Congleton play Wallis Mart and Kate Oh, who, despite their best efforts, can’t seem to make any money. Even their attempt at relaxation is spoiled by a mischievous coconut tree with a thing for truth.

This production of Treasure Island is made for families, by families! Audrey Gee plays the parrot Captain Flint whose quest for crackers is behind misplaced maps and mutiny. Mother-daughter team Anita and Katie Lynn play reluctant sailors, while Sean Stockton and Eva Gee make their theatrical debuts stirring up trouble for Jim and companions.

But what would Treasure Island be without pirates? Greg Tsigaridas, who is starting to make a name for himself as a stage villain, stars as Long John Silver, complete with wooden leg, hook, and eye patch. And if you’ve always wondered where he got the eye patch…Well, it all began with a seagull…but it’s not my story to tell! You’ll have to hear it for yourself this Friday, December 6 at 7:00 pm with additional showings on Saturday, December 7 at 2:00 pm and 5:00 pm, and Sunday, December 8, at 2:00 pm. The Waterworks pantomimes have a history of selling out, so purchase your ticket in advance at www.waterworksplayers.org or by calling (434) 392-3452. Admission is only $5 for seasoned sailors and landlubbers alike!