Snow White and the Seven Dwarfs: The Panto A Review 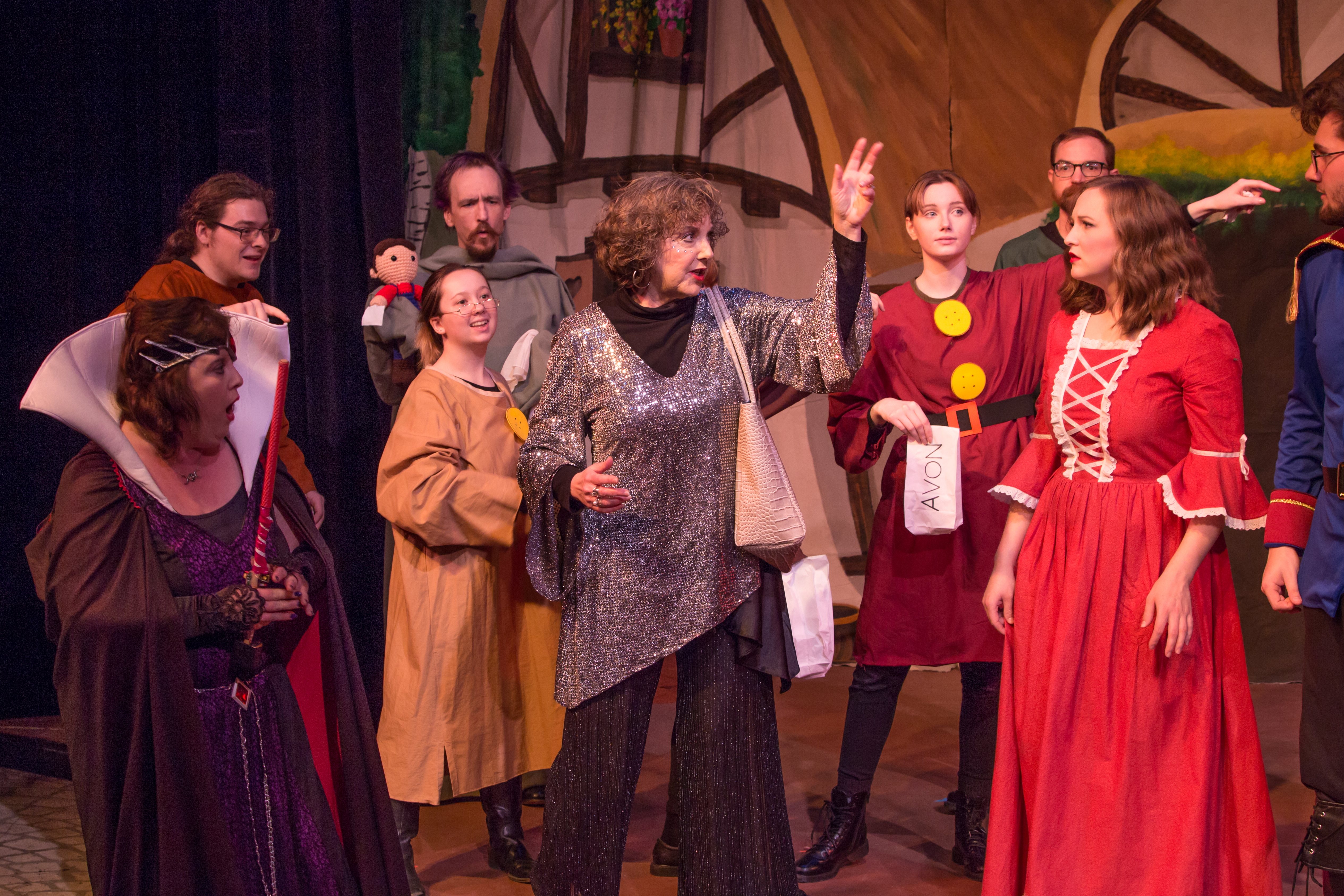 Sometimes it takes an absence to remind us just how special homegrown talent can be. That’s especially true for this year’s Panto, which has been one of the Waterworks Players’ most popular productions for almost 15 years.

Initiated by Waterworks founder and artistic director Dudley Sauve in 2007, the Panto—a lovingly twisted fairytale often featuring young children as actors—became a mid-season, all-ages favorite. Then the COVID pandemic cancelled all of the Waterworks 2019-20 staged productions.

James Barry’s Snow White, which finishes its run this weekend, is the ninth Panto Mary Jo Stockton has directed. This year she has a co-director, Randall Linkins. Each wears a second hat as well—lighting design for Linkins, sound design for Stockton.

The result is a lighthearted mash-up of this well-known tale—it’s less “Grimm,” if you will. Barry’s version is thoroughly “mashed”: there is pie-in-the-face slapstick; more than a hint of Shakespeare (men play women and vice-versa, and the evil stepmother’s cauldron spell is reminiscent of Macbeth); the set backdrop alternates between a modern-day row of store fronts and a forest primeval-with-castle; and there’s a liberal sprinkling of brand names like CVS and Food Lion.

And there are some new characters added to this old story: Fairy Flora, who introduces the play and frequently comments on its action, often in rhyme; and the cook Clarissa and her hapless son Muddles. Several of the most familiar characters are renamed. The handsome prince becomes Prince Valiant, and the dwarfs are Disney 2.0: Grouchy, Whiffy, Blusher, Daffy, Prof, Giggler, and—a special case here—Titch. The stepmother’s wickedness is now underscored by her name, Evilyn, and she comes with attitude to match: “If I wanted beauty tips, I’d go to Belk,” she growls at her magic mirror—who later, freed from the queen’s evil spell, reverts to her former self: Mirriam, the queen’s Avon Lady.

Kudos go to the entire cast and crew of this production. Elle Franssen is a fetching Fairy Flora; Panto veterans Elijah and Kolby Logue as Clarissa and Muddles, respectively, are gut-bustlingly funny; and Ashley Ashlock is a lovely Snow White, relegated to “dusting the dungeon” in Evilynn’s castle. As Evilynn, Christy Moore is both funny and scary; her voice during her changeover into an old hag is especially effective. Jackson Childers is endearing as a bumbling Prince Valiant. Leigh Lunsford is a hoot as the mirror/Mirriam, giving us a Southern drawl straight out of Tennessee Williams.

And finally, a special shoutout to all these cast members who were equally effective in their multiple roles as guards, dwarfs, ghost, villagers and woodland animals: Isabelle Halliday, John Burton, Kaitlynn Faircloth, Trenton Taylor, Rowan Danielsen, and Don Blaheta (without him, Titch would not exist).

It’s been a long year and a half, the winter solstice looms, and COVID is still with us; but if you want to have a good laugh you must see this play. Snow White’s last three performances are this weekend, December 10th at 7:00 p.m and 11th at 2:00 p.m. & 6:00 p.m. For ticket information go to the Waterworks website, waterworksplayers.org/buytickets, or call 392-3452.