Don’t miss Waterworks’ Rumplestiltskin, a show for the entire family 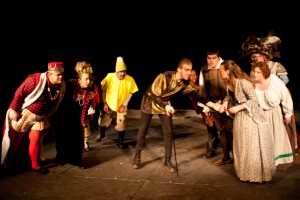 What do you get when you combine a fairy tale, clever contemporary jokes, unexpected dance numbers, an audience who is part of the performance and a rampaging elephant? The answer is an old fashioned British-style pantomime right here in Farmville. Waterworks Players’ Rumplestiltskin is a delightfully quirky and entertaining show that is a must-see for the entire family. Thanks in large part to Mary Jo Stockton, a theatre-loving Brit who has lived in Farmville for the last eighteen years, and Dudley Sauve, Farmville’s own community theatre guru, we can enjoy something that is rarely seen in the United States but is as quintessentially British as fish and chips or afternoon tea. Many people think a pantomime is a form of silent acting but nothing could be farther from the truth. British pantomimes are theatre productions that relate a traditional story with a full cast of actors and a liberal sprinkling of witty lines, clever double entendres and most important, audience participation.

Rumplestiltskin has always been a popular fairy tale. Who can resist a story with a beautiful maiden, an overbearing mother, a greedy queen and the evil Rumplestiltskin? When fair maiden Donna, played by Marianne Congleton, is locked in a dungeon until she can spin straw into gold, her only hope is the evil Rumplestiltskin, who in real life is Hampden-Sydney English major Walter “Flash” McCoy. Rumplestiltkin’s gift of freedom, however, comes with a big price tag and Donna’s friends must work hard to save her before Rumplestiltskin takes her away forever. This version of the fairy tales includes a surprise ending that you won’t want to miss.

Children, especially, love this type of show because they get to be part of the performance. In fact they help decide the outcome of the play, and even if they’ve never seen a pantomime before, they catch on really quickly and participate enthusiastically. This Waterworks’ production of Rumplestiltskin, directed by Mary Jo Stockton, will be especially enjoyable for those who live and work in Farmville and Prince Edward County because of all the local references and color that have been worked into the dialogue. The cast, including the always entertaining Leigh Lunsford as the greedy queen and Jordan Whiley as Donna’s hilariously overbearing mother, is wonderful and brings a playful, exuberant level of energy to the performance. If you’d like to read more about the British style pantomime, be sure to read Mary Jo Stockton’s blog at http://actrandomly.org/living-in-america/pantomimes-a-uniquely-british-tradition-no-longer/.

Show times are Friday, December 7 at 7:00 p.m, Saturday, December 8 at 2:00 and 5:00 p.m., and Sunday December 9 at 2:00 p.m. Call (434) 392-3452 to make reservations. Admission is $5 and tickets may be purchased in advance at www.waterworksplayers.org. The Waterworks December pantomime normally sells out, so buy your tickets before it’s too late, because this show won’t be back for another year. Don’t miss the opportunity to get out for an afternoon or evening of fun and a uniquely entertaining cultural experience, perfect for the entire family, that is rarely offered but will be thoroughly enjoyed right here in Farmville.