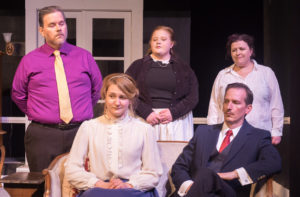 When asked, “Why Gaslight?”, director Don Blaheta had a ready answer.  “Well, there’s the current political environment.  And I don’t mean just in the last year or two.  Years ago Jon Stewart was showing clips of politicians blatantly lying paired with clips that proved the lies.  It’s getting worse, though:  and when someone repeatedly and persistently keeps contradicting reality, we begin to doubt our own sanity.”

Blaheta’s response is a working definition of “gaslighting,” itself a verb spawned by Patrick Hamilton’s 1938 Broadway hit Gaslight (also called Angel Street in many US productions).  Bella Manningham, the play’s psychologically vulnerable heroine, is subtly manipulated by her suave-but-dastardly husband Jack into doubting what she sees, thinks and feels.  Set in 1880s London, the action in Gaslight takes place in the multistory house Bella and Jack have purchased.  Items are moved, or hidden, or lost, and Bella, Jack says, is responsible—though she has no memory of it.  When the gas-fueled lights seem to flicker and change, but only when Jack is absent and she is alone to see them, she is increasingly fearful that she is losing her mind.

In 1940 Gaslight was adapted into a movie; four years later it was remade into the more familiar MGM version starring Charles Boyer and Ingrid Bergman.

“There’s a #metoo moment in Gaslight,” Blaheta noted.  “Bella’s the abused wife who can’t understand what’s happening to her, who thinks she might be going mad—until Scotland Yard’s Inspector Rough believes her.  It’s an empowering moment.” 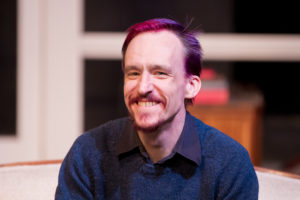 Indeed, it seems like our entire culture is experiencing a “gaslit” extended-play moment that we witness on the daily news shows—a transformative moment of parallel, non-intersecting streams of information, as Politico’s Susan Glasser told an audience at Longwood University last week.  “We live in a post-truth time,” she said, where facts are less important than emotion and personal belief.  As if to underscore Glasser’s comments, a recent WUMO cartoon in the Richmond Times-Dispatch featured “Post-Truth Time”:  Big Ben’s numberless face reading “The time is what you feel it is.”  And finally there’s Stephen Soderbergh’s current movie Unsane.  Its heroine moves from one state to another trying to escape a stalker, only to find herself committed to a mental institution.

But there are other reasons Blaheta chose Gaslight.  “It was my first opportunity to direct.  I’ve been in lots of community theatre productions; any actor knows what they’d like to do if they were in the director’s chair.  A year ago I began to plan this while re-reading the script once Gaslight was selected as one of this year’s slate of Waterworks plays.”

“But it wasn’t only the script,” he smiled.  “All the actors in this production have done or said something that I’ve glommed onto, and I’ve combined their insights with my own.  And Hannah Boswell, the stage manager, has contributed too—it’s been a real team effort, as all drama is.  Directing is certainly a challenge.  What things need more work?  What scenes need extra attention?  And most of all, what can I do to optimize the actors’ time?  But everything’s coming together.  I’m excited.”