Auditions for Sunday In the Park With George 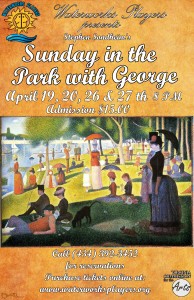 The Waterworks Players spring show is Sunday In the Park With George, the Stephen Sondheim and James Lapine’s soaring musical about a painter’s struggle between creating art and living life. A complex work revolving around the fictionalized French pointillist painter Georges Seurat, Sunday In the Park With George was the critically acclaimed winner of the 1984 New York Drama Critics Circle Award for Best Musical, 1985 Pulitzer Prize for Drama, and 1991 Laurence Olivier Award for Best New Musical.

In nineteenth-century Paris, Georges is completely engrossed in his artwork and not with his pregnant girlfriend, Dot, who leaves him to find a more supportive man. Meanwhile, Georges defiantly continues to paint, trying to improve anything he finds unpleasant through art. In the second act, the musical takes places in America in 1984. Now, Georges’ great-grandson, George, is struggling to find inspiration in his artwork. He is helped when the spirit of Dot returns with words of wisdom.

Auditions will be held at 7:30 pm on Sunday and Monday, March 3rd & 4th at the Waterworks Theater. In total a cast of about 20 singers is needed, ages 18 and up (roughly equal numbers of men and women). Many cast members will have two roles. Act I and the Finale taking place in George Seurat’s time, while Act II being modern day. Come prepared to sing either with your own music or read from the score. There will also be cold readings from the script.

In addition, we need a number of stage hands to assist during technical week rehearsals and the four public performances.