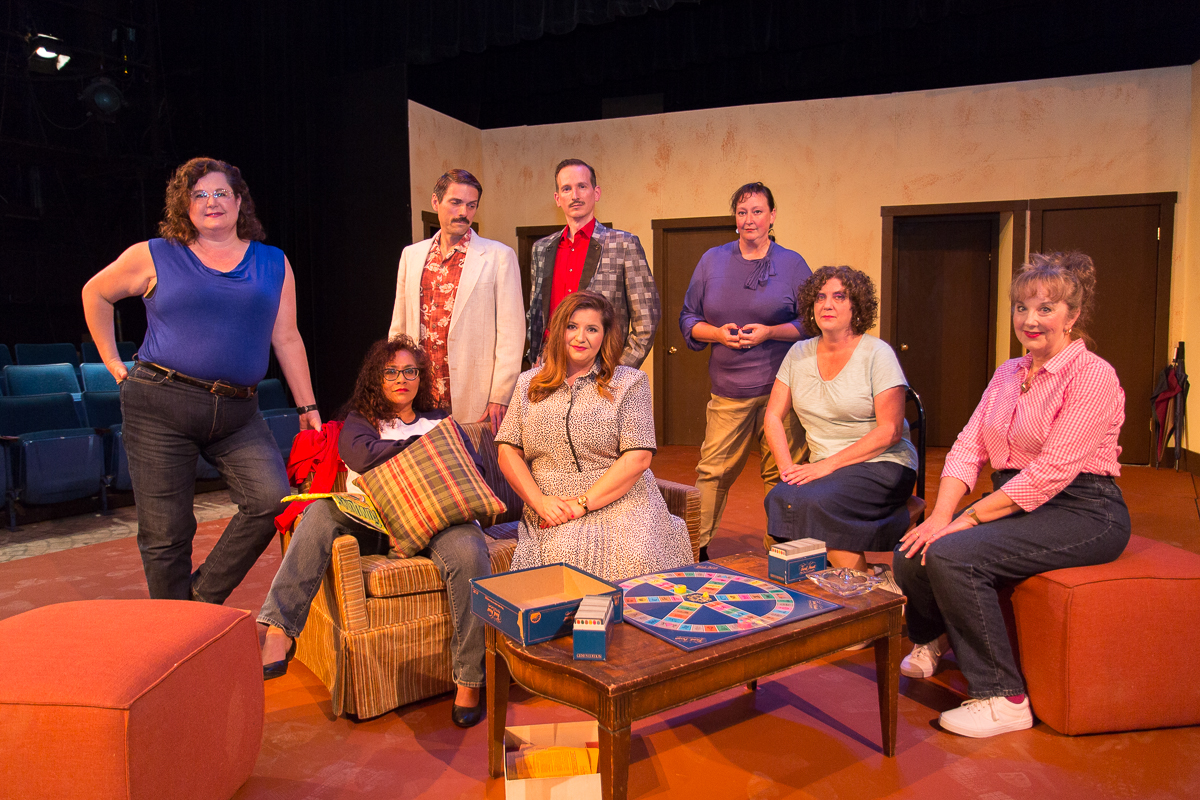 It’s time to celebrate as the Waterworks Players return to enhance Farmville’s arts scene with its first live and in-person production since the pandemonium of the Covid pandemic. Director Don Blaheta’s choice of Neil Simon’s enormously funny play The Odd Couple: Female Version is a welcome antidote for the turbulent and very odd times we’ve all endured and are still going through. Blaheta has ably directed previous Waterworks plays: Gaslight (2018) and Chess (2019). When Covid-19 disrupted live theater across the globe, Blaheta and a committed Waterworks staff skillfully launched an online production of A Christmas Carol to bring some cheer. This year, Baheta and his fine cast have ably met the in-person restart challenges: “At every rehearsal the whole cast has been masked, and that’s certainly been a little weird; but we all got really good at wearing masks this last year, so it’s not that weird. And pretty much everything else feels really, gratifyingly, reassuringly normal. It’s great to be back!”

Neil Simon’s original play, the male-focused The Odd Couple, was first produced in 1965 and won a Tony Award; some 20 years later Simon brought a much needed and refreshingly female cast and perspective to eager audiences in the mid-1980s. Simon, who passed away in 2018 after an illustrious and almost unparalleled career as a playwright, was known for such Broadway benchmarks as Barefoot in the Park, Plaza Suite, Last of the Red Hot Lovers, The Sunshine Boys, Biloxi Blues, and The Goodbye Girl, all of which he later adapted into successful feature films. Simon earned many accolades over his long career, including an American Comedy Award for Lifetime Achievement, a Sam S. Shubert Foundation Award, Kennedy Center Honors, and a William Inge Theater Festival Award for Distinguished Achievement in the American Theater.

The stellar cast of Waterworks perennial favorites would enhance any play, and they brilliantly bring their skills as fantastic actors to the stage in Neil Simon’s The Odd Couple: Female Version. In their capable hands, the play is a true delight: hilarious and poignant, somber and uplifting. Blaheta’s directing effortlessly enriches the play as it subtly weaves the rapid-pace dialogue with the onstage physicality of the cast.

Set in the early 1980s, much of the action centers around a Trivial Pursuit game night (not poker, as in the original) hosted by Olive Madison. Attending the recurring event is her tight-knit group of girlfriends: Vera, Sylvie, Renee, and Mickey. The friendly competition of the game dissolves when Olive’s friend Florence Ungar arrives. Panicky and teary, Florence confesses that her husband has suddenly walked out on her and their marriage . . . and things get out of hand when chronically untidy Olive invites the compulsively neat Florence to be her roommate.

Patricia Carter plays Olive Madison, a sloppy TV news producer whose financial generosity to her ex-husband constantly keeps her on the verge of going broke. Olive is a hot mess living in a hot mess of an apartment and offering her friends food that could qualify as hazardous waste. The props here are especially effective.

Sherri Davenport, whose comedic timing and facial reactions are consistently stellar, plays Florence Ungar, a homemaker and mother whose obsession for perfection–a spotless home, perfectly cooked meals–leads to stress and hypochondria. She imbues Florence with the right amount of naggy and fussy neuroticism.

Blaheta’s familiarity and experience with the Waterworks players–both onstage and offstage– has allowed him also to assemble a stellar supporting cast: Leigh Lunsford, who brilliantly embodies the amiably eccentric and often clueless Vera; Pam Wright, who is superbly cast as the short-tempered and sarcastic Sylvie; Elizabeth Whiley who plays Olive’s accountant Renee with the right amount of deadpan humor; and Hannah Boswell, who poignantly portrays hapless NYPD officer Mickey. These trivial pursuiters skillfully deliver Neil Simon’s laugh-out-loud banter as they attempt to help Florence find equilibrium.

Greg Tsigaridas and Jordan Whiley nearly steal the play as the gallant and handsome Costazuela brothers from Spain. The divorced Jesús (Tsigaridas) and the widowed Manolo (Whiley) are Olive’s upstairs neighbors whose struggles with English language only match their struggles to impress Olive and Florence. Both actors, who serve as foils to their downstairs roommates, work well together onstage and honestly seem more like brothers than real brothers.

ABC-TV’s series “Mad Men” (which is set in the original Odd-Couple era) featured an insightful ice-breaking question: “Are you an Oscar Madison or a Felix Ungar?” After seeing Waterworks Theatre’s production, local audience members might well ask themselves and others, “Are you an Olive Madison or a Florence Unger?” If you’re curious about that yourself, you’ll be able to easily find that answer after attending Waterworks Theater’s truly wonderful production of The Odd Couple: Female Version.